One of my favorite parts of my beat, arts and entertainment, is when I get to work on stories about arts education. A healthy arts education can give anyone — but especially youth — a sense of purpose, self-esteem and so much more.

I recently wrote a story about a group of students at Dimensions Academy, an alternative school in the Norman district for students struggling with educational or behavioral issues, who created an interactive art installation in the hopes of inspiring others to pay kindness forward. Read the story here.


The story was an absolute pleasure to work on. I went to the students' art class, helped create tiles for their project, and brought some show and tell. 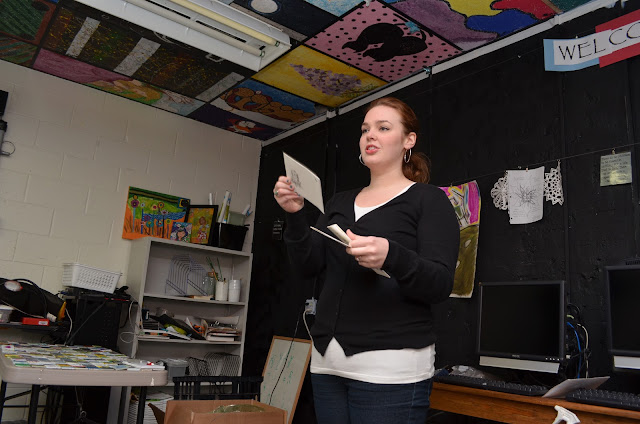 Talking to the students about art as a hobby.

I received an email from the teacher after the story ran, and it absolutely made my day:

The longer version of the stories from last week

Remember when we first talked and I told you about the incredible serendipity that has surrounded this project?  That serendipity or God or Universe just continues to shine through in so many ways.  First, while I can be a really big dreamer, sometimes the day-to-day details of life escape my attention.  Like calling in advance for a city permit.  Yes, it was on my list to do.. but, well...it didn't exactly get done in December when I had planned.  So, a few days before we installed the magnets, I called the parks and city manager, Judd, and asked him if we could install it.  After he teased me about being such a great advance planner, he said yes. Someone I don't even know who was willing to go out on a ledge.  A few days later, I was shocked to read that at the city council meeting they actually had to vote on whether or not to allow the library to put up four signs in FEB. advertising for the Friends of the Library Sale.   So grateful that he didn't make me go through a long process!

So, that would be enough to have made my day.  But the day the article came out... oh, Hannah... you should have heard the kids talking about it.  They were so proud in a so-I'm-too-cool-to-say-I'm-proud way, but asking everyone to look at their horrible picture in the paper.  Really, everyone.  Look.  :)

Oh, and Mrs. Pantalone, can we have some copies to take home to show everyone how ridiculous we look?

That would be enough.  Seeing their pride and their excitement and delight.

But then I installed it with two of my students.  It was really cold that day.  And windy.  But they didn't complain, even though it took up their entire lunch hour.  As I was leaving a man came up and asked about it- I said, Oh!  Can I take your picture!?  You are our first recipient!  He said yes, and took a Faith magnet.  After the picture, he told me that he was on his way to Tulsa to visit his mom and was going to give it to her- his dad has hospice and isn't expected to live much longer and he thought it might be helpful for her.

But then, around 2:00, one of my students call me on their way to career tech and say that they drove by the magnets and couldn't believe that it looked like nearly half were gone already!  He said he saw some people by it and felt so proud (and also like a stalker).   It was Rodney, who didn't actually think anyone would take any.

All right.  Now I feel like I am in the Oprah audience right when keeps announcing her favorite things that she is giving away to the audience.  It is just too much.

And then the wind came.  And my husband works near the depot went out to secure the structure, but saw that someone else had placed cinderblocks on it already.  Later, one of the teachers stopped by and saw that it had tipped over again and went to fix it and noticed a woman getting out of her car and leaving an envelope.  It was a thank you letter to our students from someone who said she took several for her family and thanked the students for their generosity in sharing their art.  She said she would encourage her family to pay it forward.

And all of this was what I was going to share last Thursday night.

But then, Friday afterschool, this:

Becca, the soft spoken student in second hour who sat to your right, came in.  I had her last 9 weeks, but she still comes in.  She is adopted and told me a while ago that she wanted to find her real mom.  In a really, really long story- and one that my students do not know- I put my newborn son up for adoption when I was a teenager.  He found me in 2006 (as a result of a newspaper article) and was so open and loving and let me in his life.  We probably talked or texted every day and I was able to see him three different times- once for a three day weekend.  We were able to have an immediate connection that was deep and powerful.  Less than eighteen months later, he died in a car wreck in March 2008.  I finished teaching that year, but then couldn't go back.  I thought that seeing high school kids so similar to his age would be too much.   All I could do was barely get out of bed to be a mother to my two daughters.  The grief and regret nearly took me over.    Luckily, I realized about a year and a half ago that I had to go back to teaching- that my heart hurt even more not being connected at all with kids.   That's when I got took the job at Crooked Oak and Rose State.  While I have always loved teaching, I see now how healing it has been for me my entire career.  I think that is why I am so grateful to get to be here each day.   Then, in November, I took the job here.   No one here knows about that part of my life.

So, back to Becca.  I've tried to be really aware of not pushing any of my agenda on her.  I haven't encouraged or discouraged her finding her mom, though of course, in my heart I hope she does.  She came in Friday afterschool and asked if I had time to see something.  Then she said, "I'm not sure why, but you are the only one I feel like I could share this with."  She then shows me a scrapbook that her mother had given her adoptive mother  when she gave Becca up.  It contained letters she had written to Becca, information about her family, her baby footprints along with Becca's, family history kinds of things, and a few pictures.  Becca's adoptive mother probably gave it to Becca around third or fourth grade, and Becca has added to it some each year so if she ever meets her mom, she can show her what her life has been like.  Becca has written some letters to her, there are some pictures of friends and a report card and some artwork.  I am sobbing, probably uncomfortably so for Becca, as I am reading through this book.  And then I came to the most recent pages Becca wrote and she had cut out and highlighted the articles and her quote.   There isn't really a way to put into words my feelings-  for a few moments it just seemed so clear how we are all connected.  I could feel God's love all around me as I pulled myself together and told Becca the things I would have wanted someone to tell my son, Blake.  "Look at how much she loved, you, Becca.  I can just feel it and see it when I hold this book.  And I can see your love for her. She would be so, so proud of who you are."  And we talked quite a while more.  I haven't told her about Blake still, and I'm not sure when/if I will.  But I wanted to tell you.  Because I want you to know the impact you have had through your ability to see these students fully and to be willing to support them in your writing.   That in a scrapbook of her most precious memories and mementos, your articles were in a sacred space.   And because of the beauty of each life touching so many others- and the way all of our stories get woven together.

Wow.  It will take you a week to read this.  A much longer email than I had intended, for sure.  But now you know some of what I was feeling Thursday, and now it is also obvious why I didn't write back to you Thursday night- because the story was still unfolding.

So, again, thank you.  From my whole heart.

I love these moments in my job. :)
Always,