PR tips from a journalism professional

A few weeks ago a woman called me in the newsroom. I answered, "Newsroom, this is Hannah." The woman introduced herself. I waited for her to continue. She did, in an unexpected way — "I just want to let you know I'm recording this conversation," she said, with a slow and methodical voice.

To say the least, the conversation went downhill from there. I won't bore you with details, but she accused me of libel and of not properly doing my job. She ranted — slowly, mind you — for 5 or 10 minutes before I asked her what she did for a living.

"What do you do for a living, Hannah?"

I was baffled. And didn't answer. She cursed at me and hung up the phone.

If you want something from a journalist, I can tell you this much...that's not the way to go. 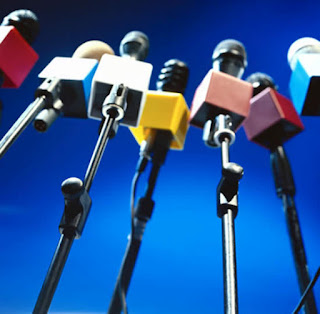 So, my public relations friends, here are my tips for communicating with the media:

If it's your first time contacting a newsroom, do some homework. Read the paper and figure out what reporters write what stories. If you contact a beat reporter (a journalist who only writes certain stories i.e. sports, crime, religion, entertainment, etc.) you're more likely to get what you need. Sometimes contacting the editor is helpful, other times they are so bogged down with calls and emails you get lost. So, if you have a relationship with someone, you're more likely to get somewhere.

2. AP style.
If you don't know basic news writing or AP style, you probably have no business being a PR professional. A few missed commas can be overlooked, but a blatant disregard for basic news rules — it's distracting and I'm not likely to even finish reading your pitch. Invest in an AP style book.

3. Understand deadlines.
Be timely. Don't contact me the day before a large event and expect me to drop everything to give you coverage. If you're building rapport (like you should be), you should drop a line in passing when you see/talk to me as much as months ahead of time. Shoot me a small, official press release about a month before the event to remind me it's happening (or even a calendar of events at the beginning of a season.) And then a week or two before, send me a full release. Give me some time to develop a full, quality story and I'll most likely do it. If it's something that is breaking and just happened, timeliness still matters. Don't wait days after the fact to contact me (if you could have contacted me before) and expect me to care.

4. Write like a journalist.
Inverted pyramid, baby. Get to the point and get to it quickly. When I read a release, I want all the important information at the top, the least important information at the bottom. Don't waste my time because I don't want to work to have to figure out what you're trying to sell me. And if I do have to try and figure it out, the email (or letter) is making a swift and final trip to the trashcan.

5. Think like a journalist.
Remember, if I'm developing a story from your press release or pitch, it has to have some news value. So what's news, you ask? Basically, anything that is noteworthy, novel, timely and/or relevant. A part of knowing what's news is knowing your audience and demographic — make your pitch relevant to the publication/media group. Example: If you're writing a press release for a theater group's production, the release you send to the media group in your city and the media group out of your city might say different things. The relevance (or the news value) for the media group in the same city is simply that the production is in the same city. The relevance (or the news value) for the media group in a different city might be that several actors from the city are appearing in the production. Make it relevant!

6. Be thorough.
To give you thorough coverage, I need thorough participation. If I tell you I need who/what/where/when/why, a handful of interviews and a high resolution photo...don't leave me hangin'.

7. Be available.
Sometimes you can't avoid a mistake. It happens. And we get it. But when we're on a tight deadline, and important information is missing, we need to speak with you ASAP. Whether it be through email or phone — be timely in how quickly you respond.

8. Be persistent. But polite.
Sometimes you leave me a voicemail and I forget about it. Other times, your email gets lost in the 150 emails I weeded through today. If you haven't heard back from me, shoot me another email or pick up the phone and call me. Remember, if I already know you on a first-name basis, this is bound to go much better. Okay, sometimes I ignore you on purpose, but other times you just fell through the cracks...so when you call, give me the benefit of the doubt and be nice.

9. Know when to buy an advertisement.
It might surprise you that not everything your group/company/agency/individual does is news. It's just not. And whining won't make it any better. Know when you've lost your battle of getting free advertisement...and buck up and pay the ad department.

10. Don't overuse or underuse technology.
Some newsrooms are lucky enough to have the newest/best technology. Others...not so much. So when you send me an email with a Microsoft Word document, sometimes I can't open it. Stick to sending press releases in TextEdit. And because opening an attachment doesn't always go as planned anyways, include the body of text in the body of the email, too. If it takes me too long to get to your release (and I don't recognize your email — remember, rapport), I'm more than likely to give up and throw it in the trash.

Also, I frequently need high resolution photos to go along with the story. But sometimes emailing them doesn't work very well. When you send the email, either include a link to a photo sharing site provided by your company, leave a note that you'll send photos through Dropbox or leave a note saying that photos are available upon request. If you're mailing a release, include a CD.

11. Journalists are people, too.
If we mess something up on our end, just tell us (politely) and we'll make note of it or do our best to fix it.

So glad to know that you get to deal with crumby people too! Thought it was just us customer service folk. Love the "inverted pyramid baby", I'll have to try and remember that for future blog posts xx

Ha! Yes...I suppose we all get to deal w/ unpleasant people now and again!