A year ago I sat in a courtroom and listened to testimony accusing a Norman woman of a year long relationship with a 13-year-old boy. To say the least, 38-year-old Amy Blose creeped me out. When she walked into the courtroom — wearing an orange jumpsuit, hands and feet in shackles, crocs with ink hearts drawn on them, the front of her hair plaited — and sweetly, smiling thanked the sheriff for holding the door open...I knew this lady had more then a few screws loose.

The testimony that followed Blose's entrance, including from the victim himself, was grueling and painful to endure. The boy was forced to share intimate details of his sexual relationship. By the end of the testimony, I was disgusted by the vile woman who just hours before had batted her lashes at a police officer. I was convinced she was guilty. 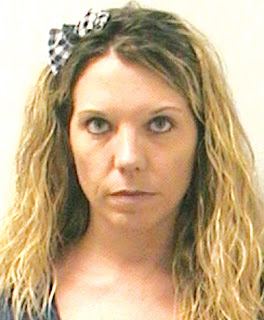 Who wears a bow in their mug shot?

When I received a voicemail from Lifetime television in April asking about Blose's case I was totally blown away. I literally gasped as the recorded message said they were looking for stories of women wrongly accused of a crime. I called Annette back in New York. Told her Blose's case wasn't completed yet and why painting Blose as a sympathetic character probably wasn't the greatest idea. Annette agreed — although she did still try to persuade me that if I had a good story idea for her they would fly me out to to New York for an interview on the television series. Which, would be cool, if Blose was actually innocent.

Come June, my suspicions were confirmed. Blose plead "no contest" and was eventually sentenced to 15 years in prison for her 24 felony counts of rape and other lewd misconduct with minors. Can't say I was surprised. The woman was guilty but didn't have enough of a backbone to plea it.