A visit with artist Paul Moore

I recently had the opportunity to visit with artist Paul Moore, the genius behind the Oklahoma Centennial Land Run Monument. Paul is a truly gifted artist and I was humbled to have a peek into his life. 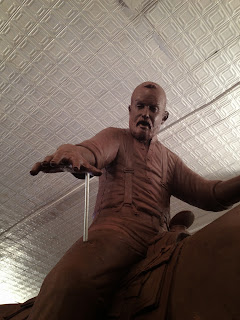 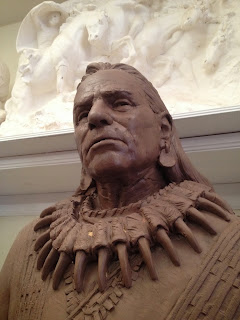 Some of the work in Paul's studio. The work on the left is a sculpture that will be going into the Land Run Monument. It was gigantic —life-size and a half.

It was a marvel to see his work in his studio. But perhaps my favorite thing about Paul is his complete love for his family. Both of Paul's sons work with him in studio, and occasionally even two of his grandchildren join as well. Paul mentioned them as often as he could during our interview — and every time he was just glowing.

I wrote a Q&A about Paul. You can read it here.

I took our photographer back to Paul's studio a few weeks after my initial interview with him. As we were walking to his studio, Nathaniel happened to drive by in his car. I had told Paul that my husband drove the canal boats that pass by his famous sculptures. Paul said he had never actually gone on a ride on one of the boats and would love to meet my husband. So when Nathaniel drove by, I told him to park and join us. The photographer only hung around for a few minutes, but Nathaniel and I stood and visited with Paul for at least a few hours! 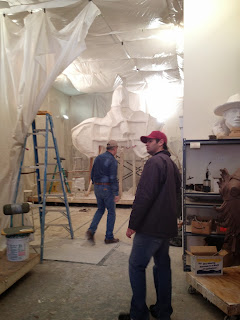 Nathaniel getting a tour of Paul's studio 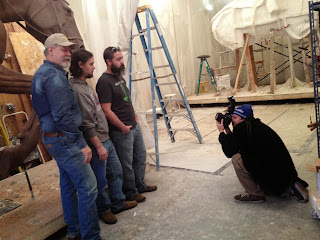 We talked about family, careers, friends, religion — everything! We talked a little about the Mormon church. Paul said some of his favorite artist friends are Mormon and he often marvels at how talented his Mormon friends are. He said he knew it was because we view our talents as a way to worship and praise God. It was a fun opportunity to connect with Paul on that level.

Among my favorite stories that Paul told us was that he was once commissioned to do a sculpture for Michael Jackson. Paul said the commission would earn him hundreds of thousands of dollars, if not millions. The sculpture was to be of Michael Jackson, surrounded with children, and would appear at Michael Jackson's casinos. The piece was in the works, Paul said, that was until accusations of child molestation came out. Paul said it was a bummer to miss out on the money and notoriety but he also felt like he dodged a bullet.