Towards the end of my internship the boss lady asked me if I would be interested in shadowing the police reporter, and then a few days later covering the police beat by myself. I was happy to oblige -- anything for the sake of an experience.

I shadowed Adam Young, the night cops reporter for the Avalanche-Journal, on Good Friday. Adam knew there was a good chance of something exciting happening with religious extremists and those looking for any excuse to get drunk prowling the town.

Turns out Adam was right. It didn't take long to get a call about a Jesus freak hanging out on the streets. And not just any Jesus freak, a long-haired, bearded, fake thorn crown, dripping in blood and "hanging" on a cross Jesus freak.* 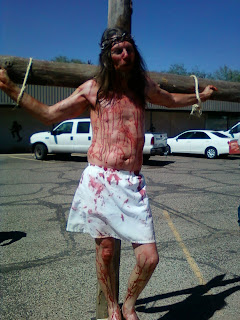 Randy Daniel, pastor of Lubbock's Sin City Ministries, stands on a crucifix prop from a play.*

Lubbock pastor, Randy Daniel, told me God told him to portray Jesus Christ by pretending to hang on the cross (okay, okay...he may have said it so it sounded more official). Pretending because after all, he wasn't actually hanging, just standing and holding his hands up -- but he was determined to do it all day. Randy said it was the least he could do.*

Besides his hourly breaks, Randy said he had been standing there all day in the hopes of "saving" someone. Randy noted he hadn't seen any Easter bunnies hop by recently, but I also noted that I hadn't seen anything but cars drive by. Strangely enough, standing in front of Randy standing on a cross, I didn't see Christ. Not even kind of. Not even close. And just a hunch, the cars driving by didn't either.