After I got back from checking out volunteer efforts at a local church, I came back to the newsroom to find a note from my editor asking me to call a woman who agreed to talk to us who had been in Plaza Towers Elementary when the tornado hit. 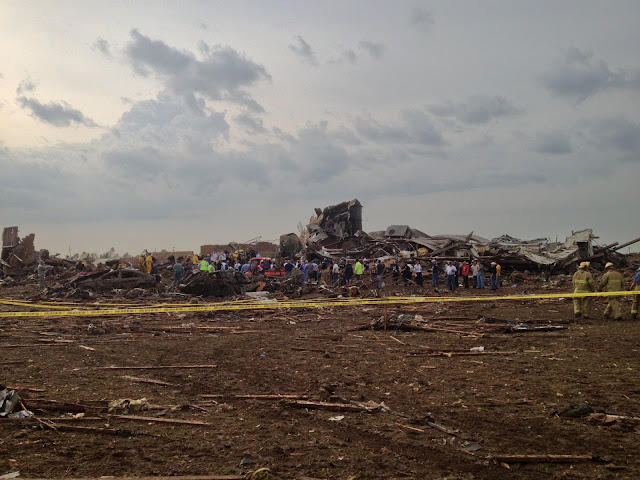 I called Maylene knowing nothing about her besides that she was a teacher's aide. By the end of our conversation, we were both in tears. Maylene's story touched me more than I can possibly say: She guarded her student's bodies with her own, singing and praying to distract them from the storm. Even when she felt the impact of a car slam into her back, Maylene's courage was unwavering. Though she had four of her own children in attendance at the school, Maylene made sure all her students were returned to their parents before she sought after her own.

Maylene's example of selflessness, bravery and love will never leave me. She is truly an angel.

Plus, she said some really amazing things about the "Oklahoma standard" that didn't make my story, like:


“Oh, it’s amazing. They always say neighbors help neighbors and communities pull together. And it’s been so amazing — not only what Oklahoma has done — but the whole world has pulled together to send their thoughts, their well wishes, their prayers. It’s for everybody, they’re praying for you, its for everybody. It’s been completely amazing because I would have done the same thing. My kids and I would have gone to the store and gotten whatever we could and dropped it off. ... That’s just what we do.”

Ironically, after interviewing Maylene and writing her story I found out she was also Mormon. In a strange turn of events, Nathaniel gave Maylene's daughter a boat ride in Bricktown in Oklahoma City where he works as a boat captain on the canal. Her daughter was there looking for something fun for her and her siblings to do (did I mention Maylene is a single mother of 10?). As they visited, Nathaniel found out she had lived in Moore next to Plaza Towers. Nathaniel told her I had written a story about a teacher's aide who worked there. She asked what my name was and informed Nathaniel that was actually her mother. Small world.