For our third writing lesson I took Miles to Campus Corner in Norman to do some observations. We sat, listened, felt and generally observed our environment and then wrote down everything we could think of. After we conquered that, we started doing some people watching. We observed how people were dressed, what they were holding and how they carried themselves to hypothesize about their personalities or what's happening in their lives. We, of course, wrote all that down, too. 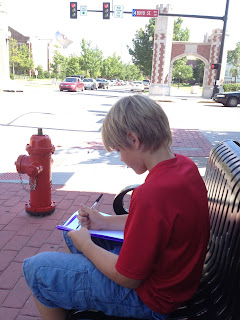 Miles working on his observations

We then headed back to my apartment and talked about using our observations to "show" instead of "tell." One of the men we observed was walking with very tense shoulders. We both decided maybe he was stressed or nervous. He was headed towards campus so we figured maybe he was a student. We described him in a scene, with tense shoulders, a crinkled brow, etc., as a way to show our reader that the character was stressed instead of just telling them he's stressed.

After a few goes at it, our hour was already over!