Creativity: Tasha of Reasons to Rejoice

Post 23 of HEIA: Creativity
Friends, meet Tasha Moon. I must admit, for a while I thought Tasha's name was a pen name -- doesn't she sound like a superhero? Or maybe a kick-butt journalist? (What's that you said? Those are the same thing? I know, I know.) Regardless, when I figured out it was actually her name, I was a little jealous of how cool it was. And then, as I continued to read her heart-wrenchingly honest, optimistic, sweet and joyful writings...I discovered she is so much more than just her name. Today, she's sharing a creative paradox. Enjoy.
♥ ♥ ♥ ♥ 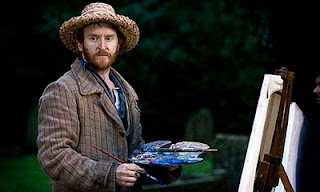 Vincent Van Gogh was indisputably one of the greatest artists of the Western World. He saw the world in a way that no one else did, which produced masterpieces such as Starry Night, Sunflowers, and Irises. He was truly one of the most creative people that has ever lived. But he was also one of the most troubled, suffering from diseases including epilepsy, anxiety, and bipolar disorder.

Like Van Gogh, I too am burdened with depression. It's a series of ups and downs - some days I am able to craft, bake, clean the whole kitchen, and feel like I can take on the world. Other days, I only have the energy to check my email and take a shower. But through it all, I've found that creativity is healing.
I believe that the power to create is one of God's most divine gifts to man. The One who took raw matter and shaped them into mountains, oceans, planets, and galaxies has given us a small portion of His creativity - but a portion of it, all the same! We too have the ability to organize our resources and create something that never existed before. We each have the ability to be, in a small way, like God.


When I create, I forget all of my troubles. They die as I bring new life into the world. I forget about myself, and focus more on my project and the person I want to share it with. Creativity helps us to become more selfless. Didn't it do the same for Heavenly Father when He breathed life into our souls and designed the world on which we would live?


* * * * * * * * * *
There is a tender episode of Dr. Who in which the time-traveling Doctor visits Vincent Van Gogh. At the end of the episode, he takes Van Gogh to a modern-day museum so the artist can see the success he never achieved in his lifetime. Van Gogh weeps as he hears a docent give this speech:
"To me, Van Gogh is the finest painter of them all, certainly the most popular, great painter of all time, the most beloved; his command of color, the most magnificent. He transformed the pain of his tormented life into ecstatic beauty. Pain is easy to portray, but to use your passion and pain to portray the ecstasy and joy and magnificence of our world – no one had ever done it before. Perhaps no one ever will again. To my mind, that strange, wild man who roamed the fields of Provenance was not only the world’s greatest artist, but also one of the greatest men who ever lived."


Using pain to portray the beauty and joy of the world - that is difficult to do. And that is one of the things that can make our creative acts the most God-like.


There is a reason for our existence, a purpose for our pain. To God it is evident, but for us, it is much more ambiguous. The greatest artists, like Van Gogh, have the ability to see the beauty in the shadows of our existence, and somehow make it clearer for the rest of us. In a way, they are able to see the divine and share it with the world.


This is why I write. I have had glimpses of joy and majesty in the darkest moments of my life, glimpses that give me great hope. I want others to know that, in spite of all the pain and suffering, there is beauty and bliss and happiness in this world - and that God is in every moment of it all.
Posted by Hannah

I love sweet tasha moon! and I love that episode of dr. who--totally made my husband and I cry! but I definitely agree with tasha that creativity is a gift from God! this is a beautiful post--thanks!

Tasha is brilliant, no?!

Hannah, I love that you are still doing your creativity series.. It means I get to read beautiful posts like this one! :)