So I didn't get that job I really wanted. I thought the interview went swimmingly, but I suppose you never really know what someone is looking for. When I left the interview I felt pretty good about it, I didn't stumble over myself nearly as much as I could have considering I had three people staring, smiling, and nodding at me as they furiously scribbled down who-knows-what kind of notes. I even thought I answered all the questions thoroughly, but hey -- if I'm not the one, I'm not the one.

A few days before my interview my dad told me a story about my great-great-grandmother, Valli Walker. When she was a little girl Valli and her family trekked across the country, through Oklahoma and on to Texas. As the around 8-year-old Valli was walking through the then Cherokee territory, she glanced down and saw something shiny. Valli had found a $20 gold coin. Her father, instead of claiming it as his own, told Valli it was her lucky coin and she should never, ever spend it. 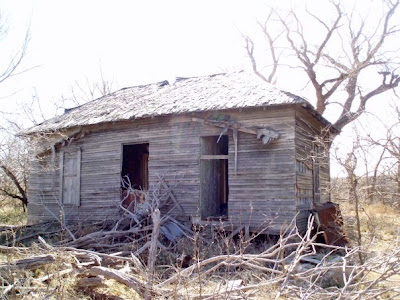 The tiny home in West Texas where Valli would eventually live as an adult. My grandma lived here with Valli when she was a little girl, while her mother went to California to pick fruit.

As time marched on through the week, I realized they had called somebody else to give them the good news I had wanted. I was seriously disappointed, and I must embarrassingly admit I cried. My hopes were high, and I had prayed that fortune, even Valli's fortune, would be on my side.

The thin walls of Valli's house, the decaying but beautiful wallpaper, Cottonwood trees Valli had planted (and my dad) on the property, and the inside of one of the rooms.

I'm not going to say it didn't work...but that coin hasn't worked yet. But, like the other words of wisdom my dad has told me, the more fishing rods you put out, the easier it is to catch a fish. Even though I'll be applying to places like crazy again, here's to believing in good luck and working to make a bit of my own.

1. Valli is an adorable name and I hope you use it for one of your future babies. If you want to.
2. They are crazy for not snatching you up
and 3. There is something better out there that HF has planned for you! Can't wait to hear about the awesome job you finally land. Good luck!!!

1. I LOVE the name Valli, but Nathaniel isn't very fond of it...I still secretly want to name our first daughter Valli though. The girls in my family don't have middle names though, so Nathaniel doesn't like that that's the ONLY name I want to give her, haha! We shall see...we shall see.

3. I definitely agree. It was a lesson in humility and faith, and I'm all the better for it!

That's a bummer the job didn't work out but that means a better one is coming! :D Such a cool story to have through your family.

i know how i it feels like. i'm currently interviewing for jobs as well and i'm seriously nervous waiting for replies. anyway, all the best because i'm sure the right one will eventually come along pretty soon :)

Lisa, I sure hope so! I love family stories...they really are the best.

Erisha, what kind of job are you looking for? I'm sure we will both find something eventually!

I'm sorry about the job Hannah but you are super talented, this just isn't the job for you. I'm sure you know that we go through certain experiences for a reason. Just take the practice of an interview with you the next time you apply for a job. It is most unfortunate that in this economy, it is difficult to get a job. And its dissapointing when you've finished studying, not to be able to go into your chosen field.

Awwwww.. sorry you didn't get the job! But I'm sure it's only a matter of time. Good luck!

Shermeen, it was definitely good practice. I'm glad I had the opportunity just to try for it. It was a good feeling to know I'm at least talented enough to be looked at! I'm still applying, applying, applying...we'll see what happens!

Jennifer, it's okay, it'll happen sooner or later!! Do you know anybody in Oklahoma?