When we were brainstorming ideas for the October N-town Halloween edition we realized we didn't have anything that touched on costumes. I didn't want to write another text-heavy story, and I got the crazy idea that maybe we could pull of a full on fashion shoot. I got busy contacting a local costume shop, to see if they'd be willing to furnish some costumes. From looking at their costumes, we thought about where we could find free locations to shoot that would match the costumes. We then contacted one of my favorite photographers, Benita with BRC Photography, as well as a hair and makeup team. I recruited some of my friends to act as the models, and a shoot was born!

It was wild coordinating all the different pieces to make the shoot happen but the day of was quite simply a blast. All the talent we had on board were creative, dynamic and excited to work together. We all brought our best to the board. The finished product was just outstanding! 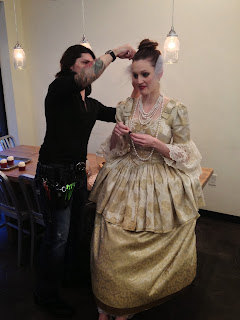 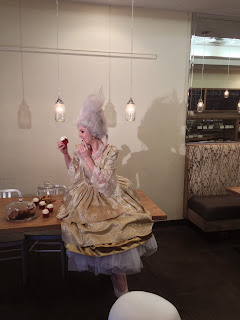 My dear friend Caitlin dressed up as Marie Antoinette. We spoke with a local bakery, Crimson and Whipped Cream, about shooting in their space. They even let us purchase a few cupcakes to shoot with. Andrew Freeman Creative Studio provided the amazing hair and makeup.

How this final spread turned out: 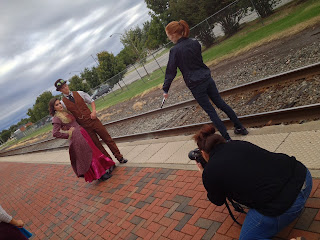 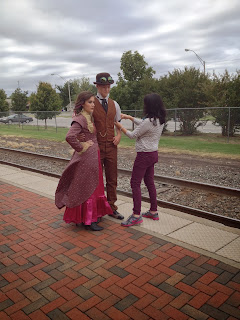 We also did a steampunk theme at the Norman train depot. Julia is a friend from church and she roped her boyfriend into modeling for us. The finished product was really incredible! I can't finish this blog without giving a major shout out to Elizabeth, fixing costumes in the right picture. Elizabeth works at the costume shop, Queen of Harts, that provided the costumes. When I went in to talk to her about costuming, I didn't have much in mind...I was just hoping for decent costumes. I couldn't have known that Elizabeth used to work major sets in Los Angeles as a costumer. Her touch on set was phenomenal and she pulled each costume together with impeccable detail. So grateful to have her! 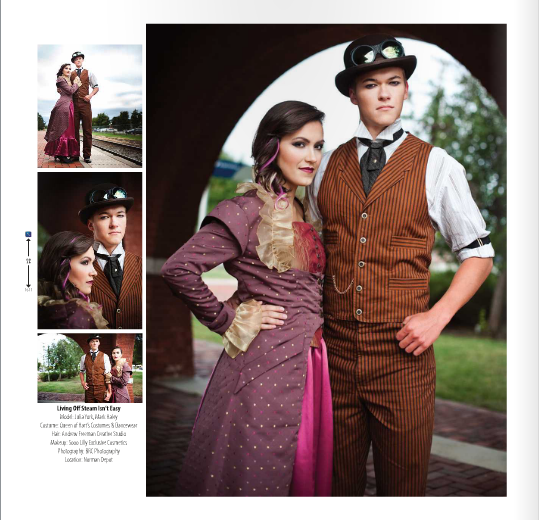 We also did a funky theatrical shoot with Jennifer Baker, the director of The Sooner Theatre, with her two theater daughters. I was running around for this shoot, but from what I've been told: These three ladies rocked it. 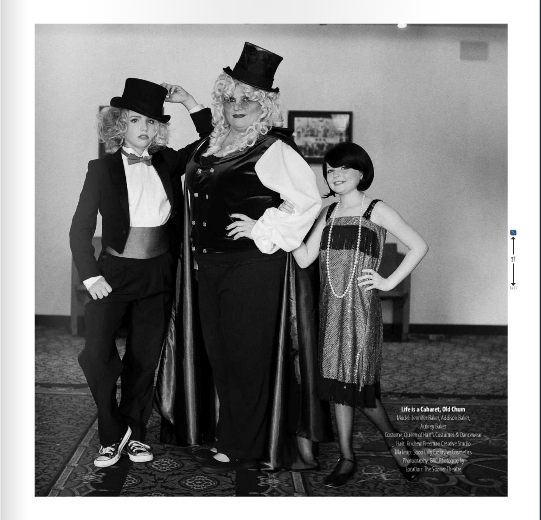 We couldn't have a photo shoot without giving a nod to our business, The Norman Transcript. Our very own employee offered up her son to stand in as a newsie. We took shots in the press room! So darling! 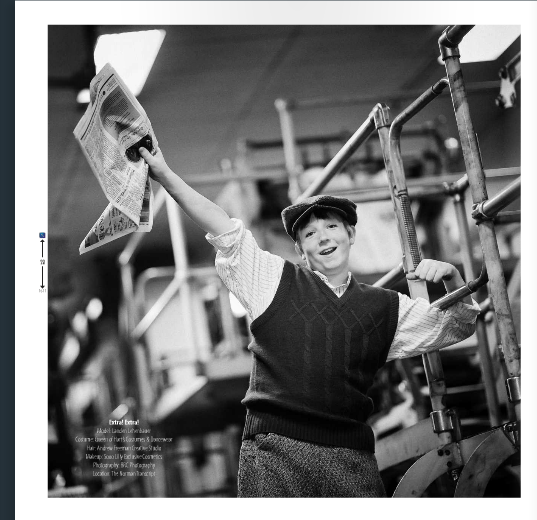 Probably my favorite concept was for the witch. My friend Kathleen posed for this character and she absolutely owned it. She was both sexy and fun. We tromped through the Sutton Wilderness to get to our destination. It was a bit stormy the night before and the day was still a little cold and windy, as you can see below. There was also quite a lot of mud...so Kathleen borrowed my old tennis shoes to get out to our location cleanly. 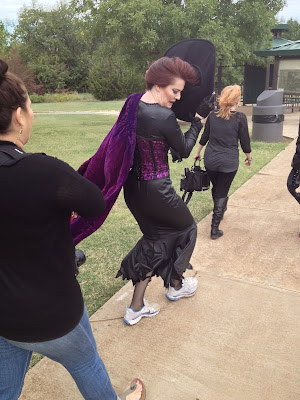 This shot cracks me up. 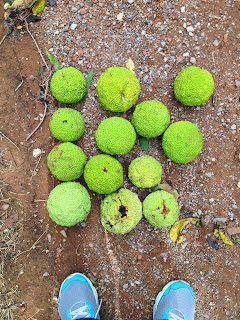 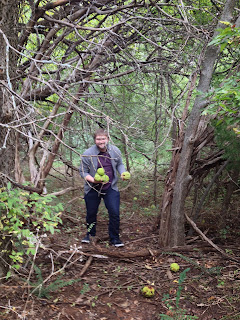 While Kerry (N-town designer) and I were location hunting the weekend before we found these fabulous apples in the park. We later found out they were called horse apples. But nonetheless, we thought they were totally creepy looking and would be great accessories for our witch. When we showed u the day of the shoot, we were really glad to still see so many there. We collected a ton and actually threw them in the shots so it looked like Kathleen was the one making them levitate. 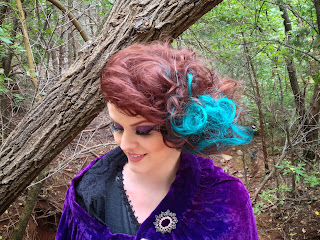 Kathleen's hair was incredible. The hair and makeup team clipped in the colored extensions and used fishing line to get it to stand up on the side like that. They weaved the line throughout her hair. Brilliant! 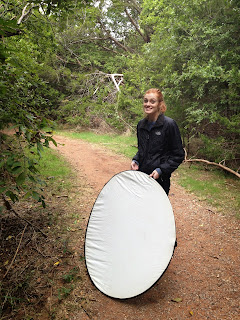 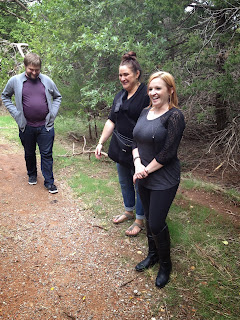 Photographer assistant, Rachel, to the left. On the right is Kerry, our photographer, Benita, and hair and makeup genius Lindsay.

The final product. Cover and inside: 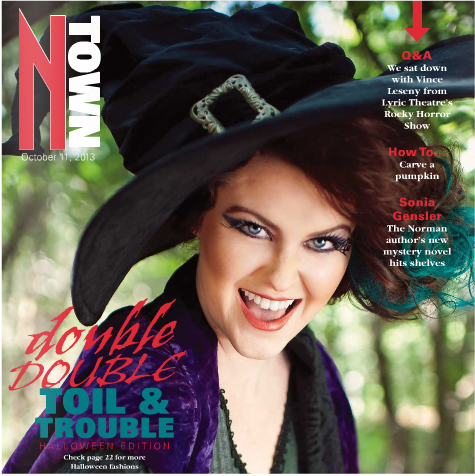 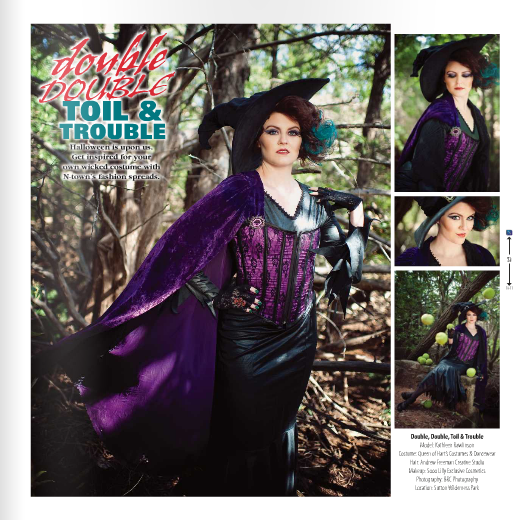 You can see our floating apples on the bottom right.

I was incredibly pleased by all of our final photos. I feel like each costume/shot really captured an individual character and story which is what I was going for. It was also great to get to highlight many local landmarks and businesses. So thankful for the amazing crew of talent that helped me out with this project! I am proud of the result and hoping we can do something like this again soon!

I still can't get over how GORGEOUS Caitlin is; these shots are amazing!

Um, hello...I can't get over how gorgeous YOU are!