My phone rang Thursday night, blaring "Uptown Girl." It was late. Mom was calling. I was laying in bed talking to Nathaniel, but I ran to answer the phone. It was the typical conversation, and I could hear Grandma in the background. Mom said she was in Paradise (where my grandparents live). I asked why.

"Grandad's in the hospital."

When I was little I would watch Grandad's hands. They were twisted and gnarled from arthritis. But o me they were beautiful. They looked rough and worked, but they were strong, and when he held his hands up to his pursed mouth as he pondered, his hands were the image of wisdom -- like old oak trees.

Grandad used to tell us stories. We would sit listening to him describe his youth running around Blanding, Utah -- his oak tree hands swirling the air. If we were lucky he would sing.

At his house, he'd walk to the stereo system and put jazz music on. He'd come from behind the corner, his fingers snapping, his old lips stretched over his crooked teeth as he smiled, singing and swaying to the music. Sometimes, we'd even dance. 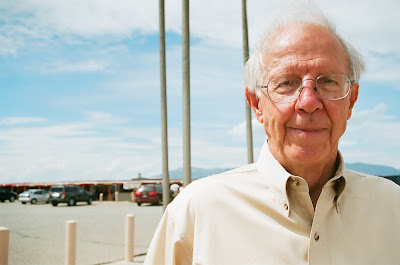 "Yeah, he's fine! They gave him a pacemaker today."

My 80-year-old grandfather, who has never been on a regular medication, hadn't been feeling well the past two weeks. Grandma said every time she'd ask him how he was feeling he would always answer, "I'm fine." She didn't know anything was wrong until she overheard him on the phone with the doctor.

Grandad drove himself to the doctor's office -- how typical of him. When they got there, they told him he was lucky to still be puttin' along with 26 heartbeats per minute. They put him in a wheelchair and wheeled him across the street to the hospital.

Grandad likes candy. Just talking about it gives Grandad a twinkle in his eye, and ushers a sly wink toward a giggling grandchild. Periodically throughout our lives as grandkids we would make candies with Grandad. He would pull out his granite slab, fire up the stove and get us ready to make truffles, brittles and taffies...among our favorites mint truffles and honey candy.

His strong hands would work as they pulled cooling taffy. He'd mix the heating chocolate, insisting we taste it before it goes in the pot, asking us to savor the flavor and enjoy how the chocolate feels in our mouths. His hands, covered in chocolate, would hover in front of his blue and white striped apron, as he rolled fudge or mint or caramel in chocolate, telling us how important it was to move fast to get the job done right.

Nothing ever compared to Grandad's homemade candies, to his ice cream and his pancakes. Grandad knows how to hit the sweet spot, and he's happy to do it. Always with his old oak hands and a twinkle in his eye. 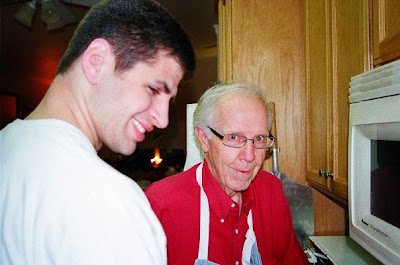 Nathaniel and Grandad making candy last Christmas. Grandad was so excited to make candy with us, and we had a blast, too! 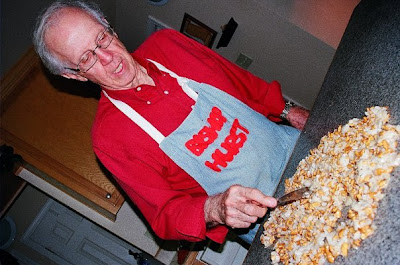 Grandad in his apron making a brittle.

Grandma blammed the ice cream. She laughed over the phone as she told me. Grandad indulged one too many times, and now he was paying for it. She said she was grateful though...now he'd be forced to slow down a little, and maybe he wouldn't brag so much about his good health. I told Grandma I thought 80 was pretty good to just now be having problems, and plus...going out from ice cream wouldn't have been so bad, anyways. I could hear the smile in Grandma's voice after I told her we got an ice cream maker for a wedding gift. Of course, she told us to make sure we come up with a healthier version of ice cream.

Last summer in Blanding, we sat listening to Grandad as we always have. His hands rested on his lips as he pondered, contemplating what he would say next. He told stories. We laughed. He counseled. We listened. He shared his feelings. And we were moved.

Grandad spoke slowly and purposefully. He told us about the eternities. He taught us about the gospel. He told us about dreams he had been having of his family, of seeing his father and his siblings and embracing them again. Tears filled his eyes, and his voice cracked. He told us of his excitement, of his peace and anticipation of passing this mortal life and returning to live with his Heavenly Father and eternal family that had passed before. We all felt the same thing. 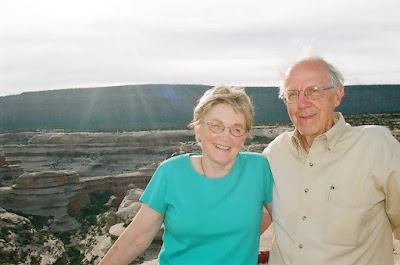 Grandma and Grandad in front of a bridge at Natural Bridges National Monument last summer.

We all laughed on the phone talking about Grandad. We recognized it was a mixed blessing. A trial but a gift. And how beautiful it is to know that past this mortal life, it's only the beginning to a wonderful eternity. Grandad and me at my wedding reception.

I love reading your blog. You're an AMAZING writter. Your grandad sounds amazing too. :)

"Dearest Hannah, we were able to print your blog piece, and I can’t possibly express how much it means to me that you have these impressions and emotions. It is so rewarding to read and enjoy your observations while veiled in the shroud of mortality instead of from the innards of a satin-lined box. It is satisfying that you have discovered it was never really about candy, pancakes or ice cream, although the fringe benefits are okay. The little private session you, Nathaniel and I had afforded some intimacy that is not so easily provided in larger groups. I gladly accept your impressions of me, and am pleased that if by coming to know my heart you will grow to appreciate some of what you have inherited and will send on down-line. Thanks for giving me such a treasured gift, and congratulations on your obvious talent. My love to Nathaniel as well. Gdad."

Thanks for this note, Hannah. I had the most horrible day yesterday and reflecting on Grandad and Grandma's courage, success and faith in Jesus Christ makes me feel better about my own situation. Love ya.