When I was a kid I did gymnastics. Not for very long, only a few years but long enough to master the splits. I remember my gym teachers making a big deal about it -- how I was only 9 years old and could do the splits, but the 16 year olds who had been working on it their entire lives still hadn't mastered it. It certainly didn't seem like a very big deal to me. It's not like it was hard.

A few weeks ago I started feeling pain in my ankle. It was only a slight discomfort at the time, but grew progressively worse over time. It never hurt to walk on it, but in certain positions and at certain times the pain ranged from a sharp sting to a dull pang. In fact, the only day it didn't hurt was at Matt and Laura's wedding. It hurt pretty bad in the morning, but quickly went away...but after wearing high heels all day my foot was pretty darn swollen! In reality, I suppose that was a blessing in disguise!

I figured maybe it would go away. Maybe it wasn't a big deal. Maybe it was a fluke? Ya know...whatever. But after a few weeks of discomfort I guessed it was probably time to have somebody check it out. Nathaniel's uncle is an athletic trainer so I asked him if he wouldn't mind taking a look at it.

I went to Steve's office to have him look over my ankle. His interns checked me out, and at first they thought it might be my achilles tendon. Steve checked my ankle out and came to the conclusion it was another one of my tendons. Nothing serious -- just some wear and tear.

Steve moved my ankle around.

Steve: Does that hurt?

Steve told me if I was an athlete, the way my ankle was moving, he'd tell me I was shot, done-for and just plain gone. Hm...comforting. He came to the conclusion I have weak joints, which really wasn't all that surprising -- after all, it hadn't taken very long to do the splits. In fact, I can still do it to this day without even stretching -- pretty weird by most definitions. Then I heard him say my bones were slightly bowed. Lucky me.

So Steve wrapped me up, gave me a few exercises to help my ankle, handed me an ankle brace and sent me on my way. 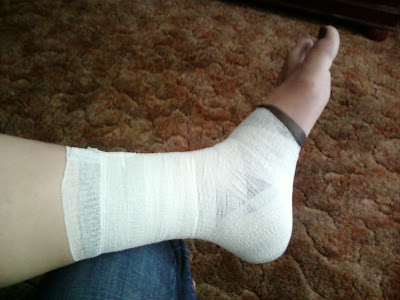 Fast forward a few weeks. Not much has changed.

One of the members at church is a physical therapist, and he offered to look at my ankle. He came to the conclusion it was my ligament -- not my tendon. Either way, he told me, I was to wear my brace and tennis shoes during the day, avoid exercise, elevate and ice everyday, and of course, do some exercises to strengthen my ankle. He told me I am overly flexible, too. Weird, huh?

Either way...I'm sportin' a brace. All I'm saying is being able to do the splits when you're 9 years old is totally not worth gimpin' across campus in tennis shoes and a brace. But, hey, at least it's not crutches.