Writing class today with Miles, I had to lecture him because he isn't doing his homework or really putting in the sufficient energy to improve. All this after having several discussions about how creative endeavors take a lot of hard work and elbow grease. He did change one detail in his story. So in the middle of being lovingly chastised he exclaimed "Every good story has to have a space bazooka!"

Miles was working on writing his chapter story, and we were discussing different elements of a story. The week before, we had discussed what a cliffhanger means. At the end of one of his chapters, Miles' character had fallen off of a cliff.

I laughed when I read the ending.

To which Miles said:

"I told you it was a cliffhanger — more like a cliff-faller!"

During class we frequently use my iPhone to ask Siri questions, like how to spell a word or where something is.

At one point Miles asked if he could ask Siri something. I handed him my phone.

I made a dollar bet with Miles during one class about a fact he needed to check. The next class he showed up with this: 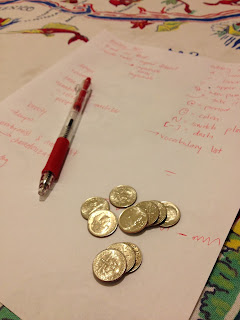 A dollar in quarters.