Towards the end of the semester, right when Lubbock started burning up left and right because of a serious lack of rain combined with high heat and winds, the boss lady had me cover the police beat solo.

I hadn't been sitting at my desk for longer than 10 minutes when the other police beat reporter, Robin, who was finishing up her shift, walked up with the police scanner in hand and told me there were multiple structure fires about 20 minutes from Lubbock and wanted to know if I was willing and able to cover it.*

I looked at Robin, swallowed my apprehension and said yes as positively as I could. Truth be told, I was a terrified.

Robin printed out directions for me to get there, I grabbed the scanner, and went off to cover the fire.

After getting lost in the country roads that had little to no visibility due to dusty farms and high winds, I made it to the fire site. Flustered and nervous, I pulled my hair back in a pony tail and stepped out into wind gusts so fast that I stumbled as I walked. My intern badge ripped around in the wind, and as the wind hit my face I could feel the grime of the dirt and fire settle into a layer on top of my contacts. 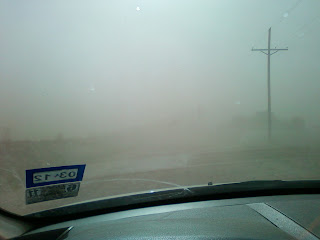 One of the country roads...well, what you can see of it.

My drive through the dirt. That's the police scanner in the background.

When I arrived, the tv news crew was just getting there. We walked up to the firefighters that weren't actively working and did a joint interview. Sadly, I was mostly mute. Stunned by my reporter's pad flapping against my pen and my hair whipping into my watering eyes, any questions I had had moments before fled from my mind as quickly as the fires consuming the South Plains. 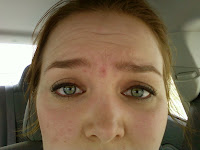 I felt as distraught as I looked. This was after I made my way back to the car. I was covered in a nice film of dirt. Notice my missing intern badge...it almost escaped in the wind and dirt.


On my drive back to the office, I felt stupid. I knew I hadn't done as well of a job as I could have. I felt like a baby. A baby journalist covered in dirt and grime, incapable to wipe my own dirty face, ask my own questions, or even walk in a straight line. Baby.

I spent the rest of the night running around like a chicken with my head cut off, trying to track down fires and sources to talk with. By the time I got settled into my desk and was ready to write my story, the boss lady had a whole string of questions for me. She went over the details of the story, and was extremely patient with all of my "I don't know" anxiety-ridden answers.

As I sat in her office going over the details of my story, the editor walked in. They both gave me journalistic words of wisdom -- how to be a go-getter, what to do in certain situations, etc. And the best part, the editor told me he was once a baby, too. He learned how to crawl before he ran, and I shouldn't worry because I was nervous today...but someday, I'd be a seasoned pro. A baby. He was once a baby, too.

*You can read the story here.