A few weeks ago Nathaniel and I took a trip up to Oklahoma. We got to Norman on a Saturday night, and woke up Sunday morning to visit church. Everyone was more than friendly, but I can't say I'm surprised -- that's one of my favorite things about the gospel, it's the same everywhere and new faces are always welcomed with opened arms. A family invited us to dinner, and we spent the evening visiting and playing with their two kids.

I'm well aware that we are on the wrong side of the sign. We were in a hurry running away from tornadoes...but seriously, we were.

We packed Monday as clear full as we could starting with a tour of the University of Oklahoma. The campus was beautiful, and even though it was hot and muggy, we enjoyed wandering the campus.

The "Sooner Schooner" with a lovely inscription painted underneath it. Apparently the schooner rides around the football stadium during a game, and during a Miami football game the schooner "accidentally" flipped revealing that inscription underneath (of course, Miami-native-Nathaniel thought this was extra funny). We got a laugh out of seeing the A&M hat outside of an OU building. And if you aren't aware...Big 12 schools are highly competitive.

After the tour and grabbing lunch at an Oklahoma pizza place called Hideaway Pizza (which was delicious, btw), we hit up the Oklahoma City Zoo -- which believe me, I was way excited about.

Even after a whopping five hours in the summer heat, we'd only seen half of the zoo. We'd seen everything from barn owls to black bears to rhinoceroses to elephants, and unlike most zoos, I wasn't bored yet. And though I was worn out and ready to get into some air conditioning by the time the park closed, I was both sad to leave and excited there was so much more for me to explore on another visit.

Giant tortoises at the zoo. 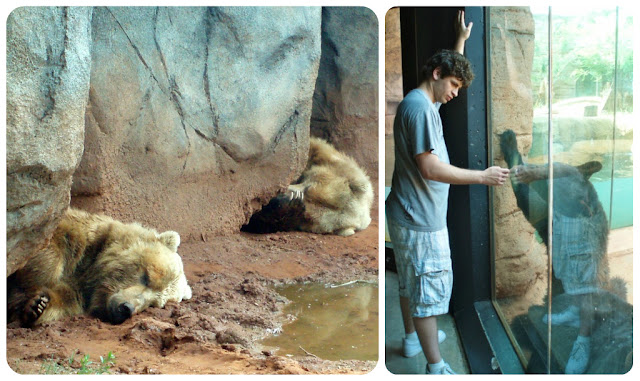 We headed to downtown Oklahoma City aka Bricktown for dinner, and tried out Toby Keith's I ♥ This Bar & Grill. The food was great and both the atmosphere of the restaurant and downtown were simultaneously chill and fun. Definitely worth checking out if you ever get the chance.

The mall has a tornado shelter. An Oklahoma mural in Bricktown. In our hotel. And a fabulous car we saw downtown.

Looks like you had a blast! I love adventures.

I just love turtles and tortoises...and elephants. I haven't been to the zoo in forever, the one in London is so expensive. Adam has decided that he never wants to visit another zoo as that's not how animals should live. I do feel horrible when I see tigers pacing back and forth, confined to such a small space.

It looks like you guys have a great time away. As always, I love your pictures.

I've never been impressed with a zoo like this one. It really was awesome! They had a barn full of nocturnal animals like bats and owls...it was really, truly beautiful. It's amazing to see animals that you wouldn't be able to see some other way. They also had a brand new elephant exhibit that was just HUGE! It was breathtaking! I don't think they belong there either, but most animals in a zoo are there because they were born there or were found injured in the wilderness or something! OH, and admission to this zoo was EIGHT DOLLARS!! So super cheap and definitely worth going back again and again and again. So if you're ever in Oklahoma City...ya gotta hit it up!

What charming photos and activities in Oklahoma! One of my new year's resolutions last year was to visit a new state. In December I hadn't gone yet so I did what any poor Texan with this goal would do, I drove to Oklahoma.

We Texans like to joke and insult Oklahoma but we found some nice gems!

Haha, I know! I actually really loved Oklahoma! We'll be moving there at the end of this month for my husband to go to OU (which is only slightly painful, I just graduated from Tech!), but I'm way excited for some more adventures! You'll have to stay tuned for some more posts!

It does crack me up how Texans and Oklahomans but heads so much! I'm actually from California and my husband from Florida, so we're a little bit of floaters...Texas will definitely always have a fond little piece of my heart though!

Where do you live in Texas? And where did you go to Oklahoma?!