...where the wind comes sweepin' down the plains! 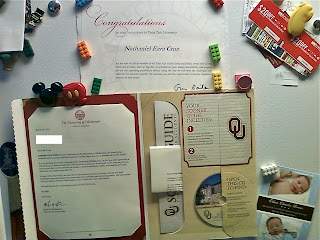 Our fridge with Nathaniel's acceptance letters from OU and Tech...OU's was way cooler.

Nathaniel was accepted to the University of Oklahoma for the fall to study sociology. And even though we've known for a good long while, we've been taking our time on making a decision. Even though we both could have been Red Raiders, we'll be a split house now! We'll be makin' the move at the end of July, and though we are a little nervous...we're mostly excited and ready for a new adventure.

P.S.
If you've never seen the musical Oklahoma! the titles of this post and the last probably don't make much sense. You should watch the following video. Plus, this one has Hugh Jackman as the main character. Did you just go, "Wha?!" Yeah, I did, too:

Hannah, if it weren't for the fact that I was leaving next month then I would have some very strong objections to this.. but I guess I will just have to live with that sad fact and move on! Good luck at OU Hannah

Hugh Jackman is always surprising me.
Good luck in Oklahoma.
And congrats to your hubby for getting two acceptance letters.

Mandie, no worries, we will see each other again! You're going to be a rockstar at BYU, I'm so excited for you! Are you blogging yet? You better believe I'll be your #1 follower!

Wow, congrats. Are you excited to move?

I've never seen Oklahoma and after watching that little snippet, I doubt I ever will! lol! Just a little too corny for me.

Good luck with the move xx

I'm way excited! I'm (and we) are ready for a new adventure.

Haha! Well...that was from a musical! The musical is actually great. But Oklahoma isn't quite so corny now. This area of the country is definitely something else though, I can tell you that much! I grew up in California and West Texas/Oklahoma were definitely a culture shock at first! And Nathaniel is from Miami, Florida...so imagine his shock when he got out here!

Where does your husband live, Shermeen?

Hugh Jackman? Wha?! Good Luck in Oklahoma! You will be missed in the ward.

Bahaha! I LOVE that you just said "Wha?!" Thank you! We will definitely miss the ward, too...y'all have been great! :)