One of the first big stories I wrote for the arts and entertainment beat was on the newly formed Norman Philharmonic.

A group of musicians had come together to create an exciting, dynamic, cutting-edge music group for the city of Norman.


I interviewed Dr. Z, the director of the phil, and was immediately taken up by his fervent energy and passion. The way he talked about music, made music feel like pure magic.

Then I spoke with Libby Larsen, an American composer. Her passion absolutely bubbled over. It was simple for me to see how someone could make music their life.

I sat through a performance the phil did for school aged children. Libby had arranged a "Norman Anthem," and was explaining her inspiration to the children. It was fascinating to hear her creative process, but even better was hearing the exclamations of joy and excitement coming from the young audience.

And then the big performance came. The crowd was more than sold out. They turned hopeful audience members away! It was standing room only, and naturally, after the performance, the entire crowd stood and clapped and cheered.

When I went back stage after the performance, I found my articles clipped and hanging on a board. 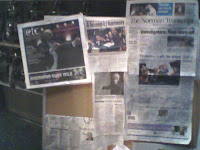 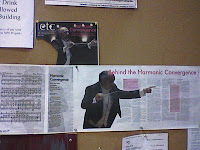 It felt amazing to write their story — of music and enthusiasm and a passion for creating a stronger community. And it was wonderful to get to be a part of that sense of community.

Dr. Z told me their inaugural success was due much in part to our paper's coverage — those are the sweetest words I could ever hear as a journalist!

P.S.
You can read my stories on the phil here, here and here.