Day two of camp* started off with breakfast, followed by a "hike." I went with the second level girls, who were supposed to go on a 5-mile hike. The hike turned into more of a less-than-a-mile-stroll. The only thing that made it difficult was the change in elevation. We did have to take a break so one of our girls could get a serious breather. But all's well that ends well!

After our walk around the campgrounds, the girls had four hours of free time. We had way too much free time on our hands, but it's okay -- we decided to bust out this bad boy: our "water front." Angela and Abby blew it up, and fetched some water from the shower with a scuzzy old bucket that we found in our cabin.

"Swimming" in our "lake" because the camp doesn't have any water. Angela got really into it.

I'd be lying if I told you we didn't get some seriously funny looks for this from other camp leaders. But not only was it fun...it was soo refreshing.

Angela's mom, Gloria, arrived in the afternoon with a late-comer, BriAnna. We were all way excited to see them!

Before dinner the girls got ready for the "modesty fashion show." The head honchos of the camp felt the girls could really get something out of a fashion show that highlighted modest fashion options. We believe our bodies are temples of God, and by dressing modestly at all times we hope to show respect for ourselves as well as God. Mostly the girls were bummed they weren't getting to do skits. As good as of an idea it is to teach the girls about modesty, I wished we had stuck to the skits, too! I think the girls missed out on an opportunity to develop their creativity and express themselves. Plus, I think the girls who needed the physical demonstration of modest clothing the most, were probably the girls paying the least attention. I think it was a lesson better saved for another day. 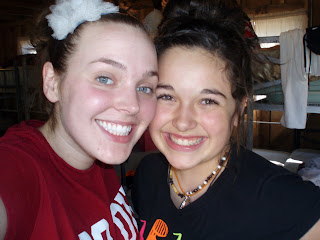 I helped Marisa, Nathaniel's cousin, get ready for the fashion show. She loved the crazy, messy bun on top of her head.

As we got ready for our fashion show, my girls expressed some concern about some campers pulling a prank on another camper who happened to be a first year. I told the girls I would talk to the girl's leader so they could be aware, and handle it themselves. When I addressed the leaders of this girl, the leaders expressed little concern, and even said they had given permission for the other girls to pull the prank. Even after we told the leaders, the girl was really upset and even crying, they showed little concern. The girl spent the rest of the night hiding from her leaders in our cabin. There was a little more drama after that, but to say the least -- I was impressed by the maturity and compassion of my girls, and seriously disappointed in the callousness of the leaders. The girls were disappointed, too.

Angela, Danielle, Dysteny and Melanie struttin' their modest stuff down the runway.

Following the fashion show, we all curled up on our top bunks to tell some ghost stories. Their was plenty of giggling of course, but afterwards, we all had to rearrange our sleeping situations because the girls had freaked themselves out. They all slept mashed up against each other. My girls are too fun. ♥

*If you're not familiar with the LDS religion, all of our clergy are not paid, and all leadership positions, be it a teacher or camp director, is voluntary based and we believe we are called by God. And "girls camp," is just that...a summer camp for girls ages 12 to 18. The purpose of camp is to draw closer to God, appreciate and feel reverence for nature, become more self-reliant, develop leadership skills, respect and protect the environment, serve others, build friendships, enjoy camping and having fun.
Posted by Hannah

I'm so glad you commented on my blog! It's hard to find the balance in life between work that I need to do/creativity/taking care of the "boring" stuff in life/having fun with my friends! It's an ever-changing process that I struggle with!
I read through some of your posts and I love the way you write! I'll look forward to reading more in the future!

We can support each other through the creative-making process, haha!