The only thing my dad wanted to do while he was here was to experience University of Oklahoma Football. And experience we did.
We started our morning off at Jimmy's Egg, a mostly-Oklahoman breakfast joint, where we were waited on by Tia, a die-hard OSU Cowboy fan, who happily waited on us and our breakfast-loving-OU-cheering table neighbors who order the same thing every Saturday morning. 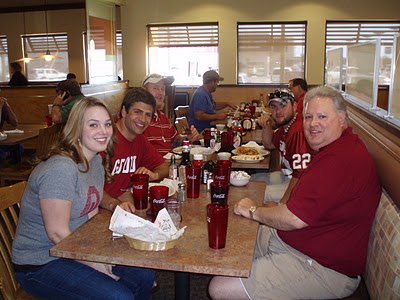 With our new friends. BTW, my father talks to everyone he sees...it makes most days pretty interesting.
I thought I understood the culture of Big 12 football after attending four years at Texas Tech University, but I was wrong -- I had no idea. Sooner fans take it to a whole new level.

After breakfast we promptly headed towards campus to indulge in some tailgating. We saw tent after tent of crimson and creme decked fans grilling food, watching football, drinking beer, and throwing footballs back and forth.
I was seriously amazed at the time, money, energy and effort, OU fans put into their fandom and tailgating. If you a fun, friendly, football-loving atmosphere...this is the place to head. It was unlike any thing else I've experienced...I'll let the pictures do the talking:

As is typical of any outing with my father, we made plenty of friends as we wandered.
Besides individuals celebrating with their personal tailgating, stores and businesses participated by selling cheap beer and food at Campus Corner, the "small college oriented shopping district" across from campus. Fans wandered through stores and street vendors before heading over to campus.

Campus Corner crawling with beer-in-hand fans, an OU football player blow-up, OU hair accessories, and the OU Ruf/Neks that protect the Sooner Schooner.
Plus, check out the graffiti I found in an alley in Campus Corner: 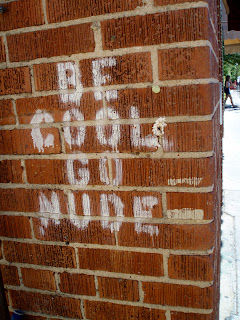 Yes.
We herded in to the stadium with all the other fans to see the game against Ball State. The stadium is massive, so despite the game not being all that exciting, the atmosphere was still intense. 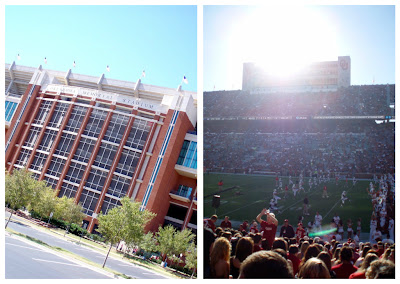 OU's stadium, inside and out.
The stadium chanting "Boomer, Sooner" back and forth. Apparently "boomer" refers to the oil boom in Oklahoma, and "sooner" refers to the individuals that got to Oklahoma sooner during the land run. 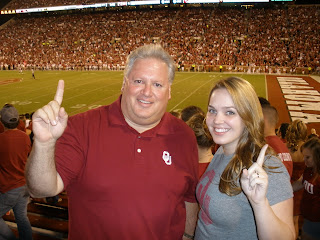 OU was a school before Oklahoma was a state. OU claims to be the "only one."
And of course, OU won...we'll see how they do the rest of the season. I wouldn't be totally opposed to a Tech-upset, but hey, that's just me.

P.S.
My dad loves garden gnomes. He kind of flipped when he saw this: 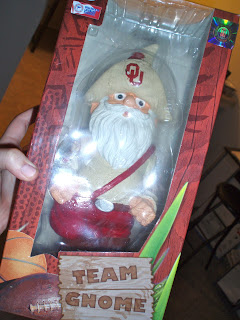 So funny that the first post mentions Ball State, where my baby brother goes! :)

Nice pics! After 5 years at my college I've never gone to a game, so it's awesome to see that you are adding all of these experiences to your belt. My dad went to Penn State, one of these days we'd like to go to a PSU game. Three cheers for parent-kid bonding experiences!

Shane, why haven't you been to your college's games yet?! I bet you're missing out! That sounds like that'd be a fabulous experience with your dad -- not much beats having fun with family! :)

I love college football, I'm from PSU so it's a big deal for me! haha

New follower to your blog, I love it already, can't wait to read more. Also, go gnomes, that little dude is too cute!

I'd love to go to a football game and experience the fanfare and tailgating. It looks like fun. I suppose it's our equivalent to Football (soccer) which everyone goes crazy over. Not so much me xx

Shermeen...you definitely MUST experience it -- last least once! Maybe you could go once you're in the states?!