I'm in the middle of the interview process for a job I seriously want. The first part of the interview was just a test -- typing, grammar, writing and editing -- and other than the 98 words per minute I typed, I have no idea how I did. Part of me feels like I won't get the job because I must be competing with my most brilliant peers. I'm sure they performed excellently on the test (okay, maybe not 98 wpm, let's admit it -- I'm awesome). The other part of me is pretty convinced I was the only one taking the test, and the joke is on me. But hey, I guess we'll see what happens!

Since I've been stuck in limbo, hoping to land my first big job, I've been considering what other career paths I could take up if journalism falls through.

The summer I turned 19 I worked two different jobs. One as a food sample lady, and the other as a receptionist for a nail salon. Between a strange woman laying her hands on my belly and "praying over me" while I stood in my apron and hair net, to having Vietnamese women shove delicious egg rolls down my throat at 10 a.m., it's not much of a stretch to say I'd love to re-live my 19th summer every year.

If being a professional food sample lady doesn't work out, I suppose I could always go back to being a lifeguard. Two years of getting hit on by 12 year olds and 50 year olds, wasn't enough to fill my appetite. I could never get enough of the real and fake drownings, and how could I forget, the skeezy guy who wore white soccer shorts on the slide -- no undies underneath or anything. I'll let you use your imagination for that one. 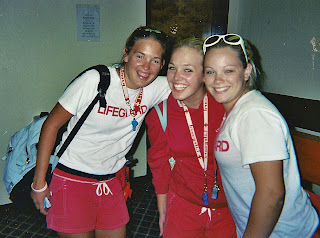 The end of my first summer lifeguarding.

While I was applying for professional-esque jobs, I stumbled across a job to be a "professional crafter." I thought that would be pretty awesome -- crafting things so other people can copy my crafting -- but unfortunately they weren't interested. I wonder if crafting for 40 hours a week would be exhilarating or mind numbing. I guess I'll never know.

And while we're on the topic, I've considered being an artist. Seriously though, I really have. I'm not exactly sure where the paychecks would come from, but I would pay myself in low-stress levels and high amounts of satisfaction. Unfortunately, I don't think Nathaniel would agree that form of payment is enough. Maybe I'll just stick to doing that on the side.

All I'm saying is...journalism better not fail me.

Hannah, you're a great journalist. And an awesome artist. REALLY. Have you ever thought about being an illustrator?

Of course it is still early days since you graduated. And it is difficult for grads to land a job these days. So don't give up just yet. And of course you can try to freelance. I'm wishing you luck that you get a new home AND a new job xx

Thanks so much, Shermeen, that actually really means a lot to me! I have thought about it, actually. My mom's cousin is a successful illustrator for a popular children's book so my mom and grandma have both brought it up to me. Maybe that will be a project I try to conquer sometime down the road!

I am considering starting an Etsy shop though to sell some artwork. I need to get a fulltime job under my belt before I start thinking of side endeavors though!

You are definitely right! I have an interview on Tuesday for this job I'm really hoping to get...so if all goes well I will be employed very soon! I am trying to have faith and endure all the changes with optimism! I was actually freelancing for the paper I did the internship with...it's just not very steady! It is good for my resume though.

i laughed like mad imagining the guy on the slide with nothing underneath. uhmmm, i could really imagine that (how sad is that!).

but nontheless, i hope all goes well for you on your job hunt and this one you are crossing your fingers for. i know what it`s like to want something so badly so keep your chin up and get that confidence shining through on your next interview!!! (yes, i`m declaring that interview... positive thinking does wonders!) :)

Thanks, Elaine! Keep your fingers crossed for me, girl! I'm pretty optimistic, too -- I hope my good feelings mean something! :)