A Word to the Wise on Steak and Strangers

The other day, while my husband was away to Boy Scouts camp and I sat around in his shirt and pajamas with dirty hair piled on top of my head, a man knocked on my door.

After peeping through the peep hole and seeing a disheveled looking man slowly walking away, I cracked open the door and slipped my head out to ask if he needed anything.

Of course, I thought to myself, I love steak.

Being the naively-too-nice person I am, I asked him what kind of steak.

Him: Let me show you.

The disheveled man, complete with sun-leathered skin and holes in his grungy off-white polo shirt, proceeded to enter my house with boxes of frozen steaks. And then, he shut the door behind him. 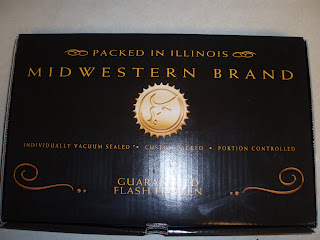 A box of said steak.

Of course, he showed me all the frozen steaks, told me all about them and all the different cuts. Then he wanted me to give him $150 for said steaks.

I told him I really wasn't interested and maybe he could come back later when my husband was home because after all, he was the steak connoisseur. The man told me he wouldn't come back because I was the one that bought the groceries.

I tried a different tactic, telling him I simply couldn't afford it and I wasn't interested. He told me no, and asked me how much I could afford. I said not much. He asked, "50?" I said no. I told him I wasn't interested again, and he offered $25 for four t-bone steaks.

Truth be told, I still wasn't interested, but this man was creepy and the look on his face said something along the lines of "Buy my frozen steak or else..." So for the sake of having the man out of my house, I bought $27 dollars of said steak.

But next time, when a man comes to my door and asks if I like steak, the answer will most definitely be a resounding, "I'm a vegetarian!"

HANNAH MOORE CRUZ!!!!! ahhh, I just had a heart attack! I would probably toss the steak, btw....I wouldn't trust it!

Oh, dear! You just used my middle name! Yeah, Nathaniel was pretty mad at me, too! I was so shocked though...it all happened so quickly! Definitely, definitely stupid!

Somebody knocked on my door yesterday...I was very slow to answer the door. He was selling security. When I shook his hand I made sure to have my door as narrow as I could and I had my hand extended as far as I could, haha!

Just wait for tomorrow's post...we ate the steak but almost burned out house down. Good news is we're still alive (so are the missionaries who ate the other two steaks!)

Ha ha ha what a funny story! Weird...but funny. I so wouldn't have let him in though...possible would have ignored the door all together. Hope you enjoy your steak! :D

Wow! That's scary! I kinda want to see what the man looked like...

@Lisa -- I usually ignore the door when I'm home alone and I see men outside my door! But he looked like a neighbor...he wasn't in a uniform or anything, so I just assumed there was a problem he needed help with! Again...so naive!! I definitely felt stupid afterwards, but I guess I learned my lesson, haha! I got some pretty decent steaks out of though...I guess that's a plus?

@Sam -- he was yucky. I even asked him why he wasn't wearing a uniform, and he said he didn't have to because he was like an independent contractor...I don't see why he decided a hole-y polo was the way to go though. He was wearing cargo shorts, too...just weird. Weird, weird, weird.

Honestly, you are crazy! You most certainly shouldn't have let him into your home! And don't eat the steak. Just how very odd! xx

And I didn't realize it was even possible to barter for steak.

But in the end it sounds like you got a super good deal.

I know...I didn't realize this either. It was seriously a strange experience! We used a chipotle marinade to cook those steaks...pretty delicious, I'd say.