Creativity: Kristina of F is for Foutz

Okay, I'll admit it: I met Kristina of F is for Foutz at girls camp. It's ridiculous, I know, but at least I met her as a leader and not as a camper this time around. What can I say? Camp is the greatest.

Anywho, when I first asked Kristina to share her thoughts on creativity, she very nicely told me no. I didn't reply right away because I was trying to think of a good way to convince her that she was, in fact, a creative person (she is a photographer after all, and seriously has the best sense of humor.) But before I had to think too long, Kristina did the convincing for me, and e-mailed me back telling me she had changed her mind. I think it was the perfect precursor of the post to come. Keep reading to see what I mean:

A guest post by Kristina of F is for Foutz

Yeah I really don't know where I am going with that post title either. Maybe it is just a warning that when it comes to my blog entries you never know what you are gonna get. Or maybe I just watched a preview for Forrest Gump and I have Tom Hanks on the brain.
I was surprised when Hannah asked me to write a post on creativity because honestly I have never sat down to reflect on myself and come up with the word 'creative'. In fact, I'm not sure sure I have ever sat down to reflect on myself. Except when I put on my makeup, but I don't think the act of staring deeply into your eyeball as you apply eyeliner really counts as reflecting upon yourself although a reflection and yourself are both present. It's a funny juxtaposition that way.
So I have established that I don't think I'm creative, but the fact that Hannah thinks I am makes for one interesting fact: I am awesome at faking it. (Creativity). So today I am going to talk about the best way to fake being creative, cause apparently it works for me.

1. Find something interesting and exploit it. 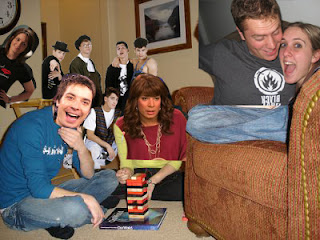 I am not interesting. I am a stay at home mom with a small photography business and a totally eclectic blog. I work part-time at Vandelay Industries. I don't use my days to their fullest and I'm a terrible housekeeper, and I don't craft. Like, AT ALL. But every once in a great while something cool will pop up in my life, like recently I screwed up our anniversary plans to see Jimmy Fallon and decided to make a big fuss until someone fixed my error. Seriously I think there were 5 consecutive posts about Jimmy Fallon -- but people apparently like him so I milked that for all it's worth. Just beware of repercussions, apparently now the Jimmy Fallonverse thinks I am 100% obsessed with Jimmy Fallon and have recruited me into their ranks. Watch as I crush their hopes and dreams in a new blog post titled, "I am not 100% obsessed with Jimmy Fallon: a study on peer pressure" Coming soon! It is going to be awesome, and yet will be the 6th or 7th post I've written concerning that dude. EXPLOITATION TIL YOU REACH CREATION!

2. Make something that is uninteresting SEEM interesting.
You can do this with ANYTHING. In writing, just use a lot of adjectives and adverbs. The small gray rolly-polly scuttled across a dirt-streaked tile in the unkempt kitchen of a tiny low-rent apartment. It paused suddenly, as if contemplating it's meaningless existence, legs and tiny antennae (do rolly-polly have visible antennae? meh.) twitching, caught in the moment between stillness and sudden determined movement. Does it feel its impending demise? Does it realize the giant shadow that descends upon it belongs to an overenthusiastic bug-ocidal 2 year old? Or has it merely found a small delicious snack lodged between two dustmites? The foot hovers momentarily; will he exercise mercy? A stomp, followed by a primal scream. IE Bensen squooshes a bug.


3. Drop as many pop-culture references as you possibly can.
Seriously, people will think you are smart and hilarious. Drop references across the board, make them a little vague. Some folks will pick up on some of them, different folks will catch the other ones, and everyone will think you are a genius. Can't think of any pop-culture references? Just end a paragraph with a quote from Seinfeld. Never watched Seinfeld? I'm speechless. I have no speech. You're in trouble cause it's not on Netflix instant streaming (LAME!). You'll have to walk on out to the mailbox and get them on DVD. I'd do it for you but I'm tired. I have been performing feats of strength all morning.

4. Hang out with creative people.
Who knows, maybe a spark of their genius will land on you and ignite you with permeating creative fire. Or maybe they will do something creative and you will be there and other people will be like, oh my gosh that was so creative, and you can say, yeah I totally helped with that. See, that is my hand poking that ball of cookie dough. 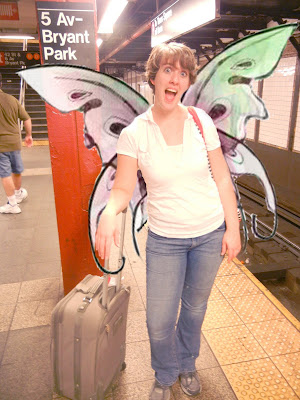 So you know how in animal farm all the pigs were pigs but they started acting like men and then in the last chapter the animals looked in the window and they couldn't tell the difference between who the men were and who the pigs were? Well I like to think that creativity works the same way. Act like a creative person. And eventually, you will be creative. It's like a caterpillar that magically transforms into a butterfly. We all know there is no science involved, pure magic. Same with creativity. There is a magical change waiting for you. And if you don't believe anything in this paragraph, that makes 2 of us. Because I am still faking it.

I know what you're thinking. "Ah, you're crazy." Am I? Or am I so sane that I just blew your mind?
"It's impossible." Is it? Or is it so possible that your head is spinning like a top? "It can't be." Can't it? Or is your entire world just crashing down all around you?

Number 5 is my plan. Haha Love the guest post.

Three cheers for Kristina! :) I love her, too!

Ah thanks everybody. UPDATE! Rolly Pollies do indeed have antennae. We studied one in detail today.