Nathaniel and I hit up the Oklahoma State Fair on Friday. And boy howdy, did we have a great time. Or shall I say, our stomachs had a great time? If you thought you were hungry after reading this post...well, shoot, you have somethin' else comin' to you now. I'll warn you now...this post is crazy picture-heavy. 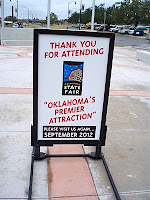 No, thank YOU.
Friday was raining on and off all day, and we decided to take our chances at the fair. It poured on our drive there, but by the time we got there the weather was perfect. We were happy to see everyone else was scared off by the weather, though -- it made for a pleasant and stress-free visit. 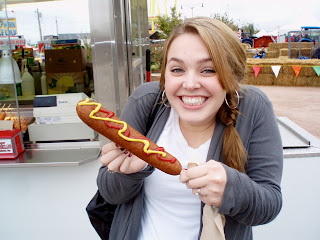 Does anyone else love corn dogs as much as me? I must admit though, I only like them at the fair. It took me all of...five minutes, before I bought this little beauty. And I'm obviously stoked out of my mind about it.
I munched on my 'dog as we wandered a giant barn full of bleating sheep and giant horses. We walked over to the next barn, and discovered the giant-eyed cows, fluffy baby chicks, and brand spankin' new piglets. Although I've never considered myself an animal-lover, my heart skips a beat when I sit and watch animals interact -- especially when it's a mother and her offspring. It's strange to me that as humans we treat the parenting process as if it's completely foreign. From the very beginning, a pregnant woman is treated like she is sick, and then once she's a mother, we rely on books and experts to tell us what's best instead of instincts. Somehow, every other mammal still knows what's up except for us. Ah...what can ya do? 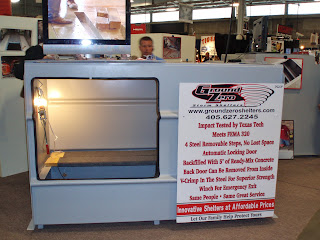 I guess stereotypes are based on some kind of truth, right? Since I'm new to Oklahoma, I have little to no understanding of what a tornado is like. But I wonder...are these shelters really necessary? And how many do you think actually get sold?

Nathaniel is a big candy fan, so when this candy salesman for Sweet & Sour USA started offering us free sour candy samples...we were sold. Each strip is 20 inches long. The outside is chewy candy, and the inside is...gooey candy. Delicious, to say the least.

We bought "sour blue raspberry," "sour apple," and "sour strawberry."
We found ourselves in a building called "AGTROPOLIS." The building featured all-things-agriculture interactive children exhibits. Kids could pretend to be farmers, pet baby chicks, and even pretend to be a cow. It was definitely interesting for us adults, and would have been even better a few years ago.

In Agtropolis. 1. Yes, that's a hill with goats on it! 2. They showed each phase of a butterfly's cocoon. There were butterflies all over the cocoons, too. 3. Googly-eyed alpacas! 4. Can you spot the bug?! It looks like a twig! 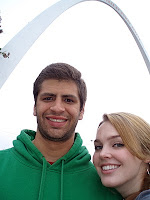 Stopped for a photo!
We stopped for some root beer and curly fries -- both delicious! The root beer tasted like classic root beer barrel hard candies. One of my favorite thing about fair food is that you get to watch them make it right there in front of you -- you know your fries are fresh because you watched them peel, cut and take them out of the frier! 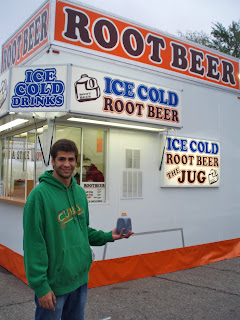 Nathaniel with our tiny jug of root beer. 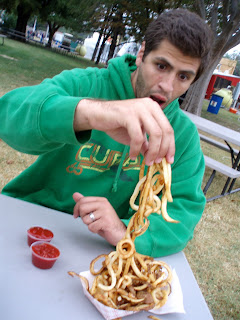 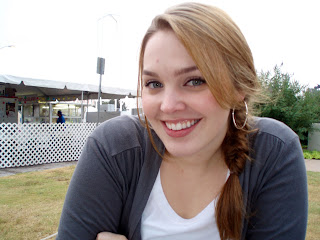 What'd I tell ya?
Between our snack and dinner, we stopped to watch a sea lion show. Because it had stormed earlier that day the sea lions were a bit spooked, but they were adorable anyways. The host was both entertaining and informative. It was nice to hear facts about the animals along with the show. 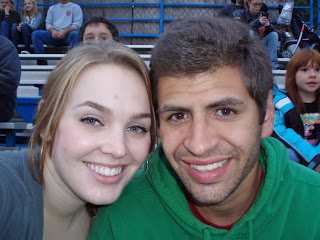 Watchin' the show.
After the show we grabbed "dinner" aka another excuse to eat greasy fair food. Both of my mom's parents are from Blanding, Utah, where both Mormons and Navajo Indians abound. At restaurants and fairs in Blanding, they have what are called "Navajo tacos," or fry bread with pinto beans, ground beef, onions, tomato, lettuce and shredded cheese piled on top. At the Oklahoma State Fair, they called them "Indian Tacos."

I had seen people wandering around with giant Navajo tacos, and when I saw the long lines in front of the stand that said "Indian Tacos," I knew I had to have one. And let me tell you what, Dan's Famous Indian Tacos did not disappoint -- easily the best one I've ever had!

Nathaniel grabbed a turkey leg to compliment his share of the taco. We sat enjoying our food and sippin' lemonade while we listened to the very old but still fabulous Leon Russell performing in the background.

Holy delicious goodness. Do you see how BIG that sucker is?!
Nathaniel refused to leave the fair without a cinnamon roll. I can't say I regret it, but some crunchy nuts would have made it better. They did sell us some milk though, which is a brilliant compliment to the sugary, cinnamony goodness that is a quality cinnamon roll.

We watched them put these suckers in the oven.
I won't lie to you, though...I had a pretty bad stomach ache by the time we left: 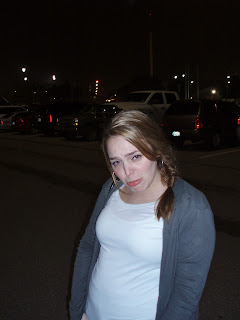 It was totally worth it.
Oklahomans, if you haven't been to the fair yet you have until September 25th to make it. Do it. Go indulge. You won't regret it.
Always,

I've never been to a fair...least not like what you guys have. Ours are just rides. It sounds like fun though. I'm not sure I could have crammed in as much food as you two, just looking at that all made me feel full! lol! Glad you had a good time. You two look super cute xx

Growing up, my mom never let us eat the food at the fair cause it's so unhealthy, so I've never had most of this stuff. But this makes it all look so delish!

Shermeen, you're totally missing out. And, um, I have no idea how I stuffed that much food into my stomach. I was feeling pretty darn sick at the end of it though. And thank you!

Kathleen, I don't know your mom but from what you've said she sounds like a hoot. I love the idea of wheat chocolate chip cookies...too funny! And yes, TOTALLY delicious!